A February Entry From My 1976 Journal 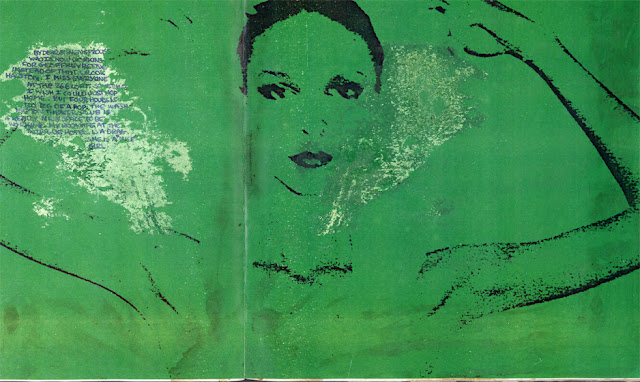 Stephen Sprouse was living in a now famous loft building having been invited to stay by the temporary  landlord, Benton Quin who had also previously invited Chris Stein and Debbie Harry. We were all still playing well together. (See some pix on my website here: Blondie "266 Loft" ) Stephen was experimenting with Color Xerox. It was new to all of us and too expensive for most. We loved the high contrast you could get from Xeroxing a photo and the new bright colors. They had an influence on his clothes to come. He gave me this picture (I wish I could remember the name of the model who looks like one of "Antonio's Girls") and I think I folded it. We didn’t know that it took these forever to fully dry. The two sides got stuck together but I peeled them apart so I could paste it in my journal. I didn’t know about archival glue and preservation methods in those days. Then I took my Journal to Washington, D.C. where I was in previews with Divine, et al in Tom Eyen’s "Women Behind Bars" and I wrote on it.

I try not to judge my callow self.

Here's what it says.:

‘BY DEAR STEVEN SPROUSE WHO IS NOW WORKING FOR GEOFFREY BEENE INSTEAD OF THAT CROOK HALSTON. I MISS EVERYONE AT THE 266 LOFT. I WISH I COULD JUST HOP HOME. BUT FOUR HOURS IS TOO BIG OF A HOP. THE WASHINGTON THEATER CLUB IS A REALLY NICE SPACE TO BE WORKING. MY ROOMATE AT THE INTRIGUE HOTEL IS A DRAG. SHE IS A “NICE” GIRL.’
Posted by Lisa Jane Persky at 2:35 PM No comments: 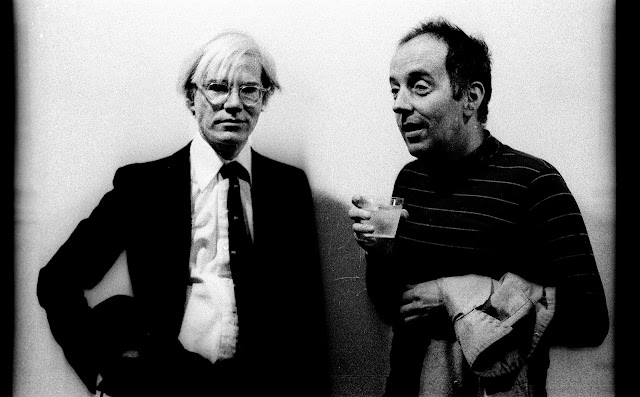 Maybe I'm going out on a limb saying that Taylor Mead died the other day because he'd been chased out of his lower east side home by developers; that his finally giving up and giving in to such an alternative landscape as Colorado led to his system giving out. Having a fight to play to is good for some people. Particularly so if you were still the Taylor I met back before 1975, the year this photo by Anton Perich was taken. I'd see Taylor around. We were acquaintances. I'm assuming in some ways he remained that Taylor Mead, the man on the right with a drink in his hand and probably Quaaludes or something more in his system. The head he achieved freed him up to poet himself, to rant around. He was in a constant state of improv.

There were a lot of guys who spoke only poetry in those days. There were few to no girls, so Patricia Smith became the famous one not only because of her words but because of guys like Taylor (though no two were exactly alike.) We took for granted that the next crop and the next crop would appear in this style of unique but they haven't. They're becoming extinct. I would marvel at how stoned Taylor could be or seemed to be and he scared me, in that way that clowns can. He was sweet--or not. I never witnessed a middle. That was his radiant being in 1975 - or at least it was the one I saw.

Jackie Curtis invited me to a party at Taylor's apartment. Or at least, I think it was his apartment. It was a loft with an elevator that opened up into it on the second or third floor of a building indirectly across the street from The Factory.  I went and brought Blondie bassist Gary Valentine. That's what we all did then. We heard about a party, everyone invited everyone and everyone went. All and everything below 23rd Street was reaching critical mass at Taylor's place. I liked being there. It was "fresh," as the kids say. Now that I think of it, I don't even know if Jackie was invited by Taylor himself.  The party was huge. It was hard to move from one room to another. It was a most exciting thing to see Viva up-close. At the height of this mongo-bongo-throng-o, Taylor started screaming at the top of his lungs, "GET OUT! GET OUT, EVERYONE! IT'S MY BIRTHDAY AND I INVITED YOU HERE AND NOW I'M THROWING YOU ALL OUT. GET OUT! GET THE FUCK OUT!! Gary and I thought this was cool and scary and kind of sad all at the same time. Who knew it was his birthday?!


This was the native state. Try stuff. See what happened. Only hurt yourself. There was a horrible crush for the elevator and people were trampled but they liked it.

This (ca. 1920) painting by Hugo Scheiber, appropriately named Shouting, Self Portrait has always reminded me of that Taylor.  He may have died in Colorado but  I’ll bet he was back in Manhattan by nightfall. 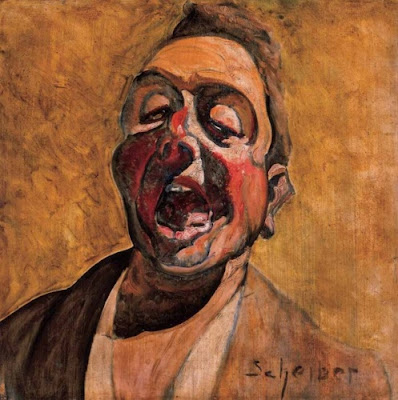