I ATE THE WHOLE THING 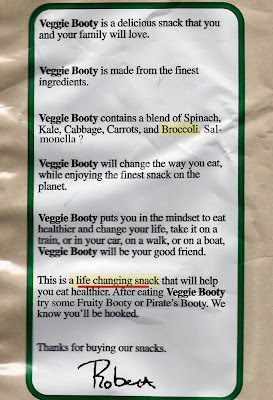 I chose Veggie Booty for a snack today. It's billed like alot of snacks as a "natural" treat. It has things in it that are supposedly good for you that have been reduced to something puffy with a bit of crunch and very little flavor save for salt. Not a bad thing, really. I rarely eat Veggie Booty but I like it and today I ate the whole bag, up to but not including the actual bag, with the exception of a couple of pieces. Those were offered to my boyfriend who has always been against the idea of kale and practically any other vegetable and has a special hatred that he reserves for broccoli.
Tonight, upon returning home and checking my email, I happened to notice a small headline that would call out to me under any circumstances. I did not guess the close personal nature of the story. The headline is this: Popular Snack Food Pulled From Shelves. Surprise! It's Veggie Booty.
Salmonella is at hand or perhaps elsewhere inside the body, or maybe not at all but it sent me to the trash for the bag. I read the bag for no particular reason. Robert at Robert's American Gourmet says if I dump out the rest of the contents and send the empty bag back, I can get a rebate. The FDA and the CDC say Robert's is recalling ALL SIZES AND ALL LOTS. I don't know what frightens me more, the possibility of getting Salmonella or the possibility that my boyfriend may one day know that he ate--no, that I FED him broccoli. 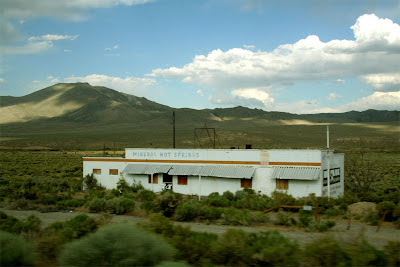 Miles from no/some/anywhere.
Speaking of locations, far more accessible is my
new photo website at:
www.lisajaneperskyphoto.com
I'm just getting started and will be adding/subtracting/updating as time allows.
All photos will also be for sale via paypal and I can be contacted through the website.

Posted by Lisa Jane Persky at 8:08 AM No comments: