It must have been a big one to have had all those fancy attorneys connected to it (see below) but I don't know the details .
What interests me is this; Clarence Darrow looks so wild and youthful and he is probably 66 years old in this picture. Also and moreso, less than six months later, Leopold and Loeb killed Bobby Franks. Clarence Darrow defended the pair and prevented them from being executed with an argument that their crime was commited as a result of taking Nietzche's existentialist ideas too much to heart. His summation is here. The argument went a long way to changing public opinion regarding the death penalty.
Posted by Lisa Jane Persky at 9:31 PM No comments: 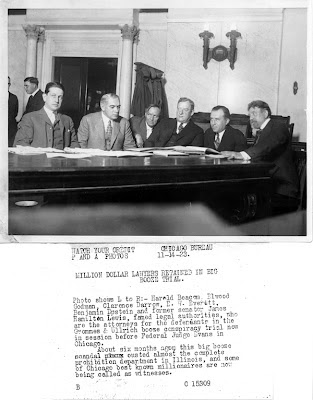 Posted by Lisa Jane Persky at 9:15 PM No comments:

Iggy and The Stooges on Jimmy Kimmel 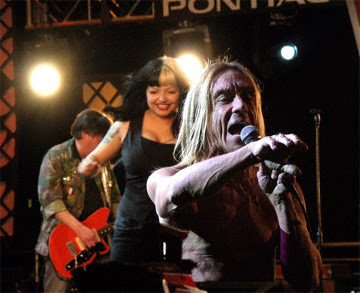 A fan sneaks up behind Iggy during his performance on Jimmy Kimmel tonight. See it if you can. More to come.
Photograph by Lisa Jane Persky

Posted by Lisa Jane Persky at 11:23 PM No comments:

Where do record executives come from? 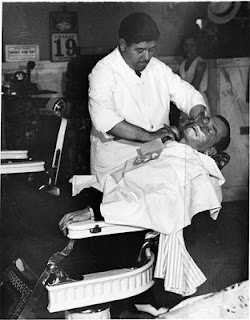 Jimmy Walker (not to be confused with J.J.) was Mayor of New York from 1926 until he resigned under threat of prosecution for corruption within his administration in September 1932. The photograph below is dated 8/19/32. Within a month, he had fled to Europe to avoid the possibility of jail. He had returned by the 40's and became head of Majestic Records (Louis Prima's label at that time). He died two years before the label in 1946.
The movie "Beau James" is loosely based on his life and Bob Hope stars in his only dramatic role.

The picture below is exactly the kind of photo that draws me in. For you actors out there, we know that this depicts the ultimate "trust exercise". One man stands over another with a sharp blade at his neck. The second man seems clear on the fact that he is just getting a shave. So clear, in fact that he reclines, his eyes closed, his chest serving as a table for the foam castings. His hands appear to be relaxed. There is a woman standing in the shadows of the background smiling broadly. Other delicious details include the page-a-day wall calendar, a man's straw hat, the telephone. Without knowing that this is Mayor Walker, the information in the photograph is dramatic and compelling, and then there is the story of the photograph:

"WALKER GETS A SHAVE AND GETS NICKED"
ONE OF THE TIRELESS PHOTOGRAPHERS WHO HAVE PURSUED MAYOR WALKER SINCE HIS OUSTER HEARING AT ALBANY, FOLLOWED THE MAYOR INTO A BARBERSHOP TODAY AUG. 19 FOR A FEATURE "SHOT". THE MAYOR HAD NO OBJECTION BUT THE PHOTOGRAPHER'S FLASH BULB EITHER DAZZLED OR UNNERVED THE BARBER; RESULT, A SLIGHT NICK IN THE MAYORAL EAR. HIS HONOR MADE LIGHT OF THE INCIDENT. HERE IS THE PICTURE. MAYOR WALKER IS BEING SHAVED BY BARBER DAN RAMUNDO IN THE (presumably here is the name of the barbershop which is not legible due to disentegration of the paper). 8/19/32
and the story behind the photograph of a man who is probably under the greatest stress of his life and career.

A memorable example of this kind of moment in photography is Stephen Shames photo of Angela Davis outside the courtroom during her trial. She looks glamorous and relaxed in spite of the pressure she had to have been experiencing. The photograph itself is full of grace and completely uncontrived. It can be seen at the Steven Kasher Gallery 521 W. 23rd St. New York through May 26th. If you have a chance, you really should see this show.
Posted by Lisa Jane Persky at 8:34 AM No comments:

Posted by Lisa Jane Persky at 6:45 PM No comments:

I recently purchased some old news bureau photographs.
More on this one tomorrow.
Or: You tell me. Comments? 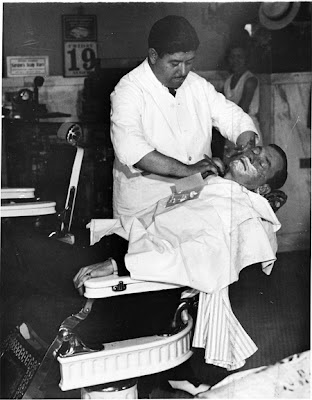 Posted by Lisa Jane Persky at 5:17 PM No comments: