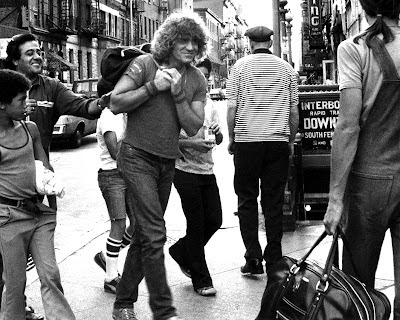 Jerry Ragni was the first person I ever knew in NYC.
I came at his invitation to visit him from the Toronto cast of Hair in '69 or'70, hung out with he and Jim, and hung out with Jerry as much as I could at the Chelsea, where he and Jim had three separate suites, wherein all three phones never stopped ringing, and which neither of them ever picked up. Thank you so much for this marvelous photo of this truly revolutionary talent, and this memory of a creative genius. Michael Rudder

I was on 3rd Avenue one night when this Guy with Stage make-up still on his face,asked if I would like to go Party? I said sure,why not.When we arrived he introduced me to Jim Rado,he was busy working on a script of some play.That's when Jerry told me about "HAIR".He asked me what my name was,and,I said Bobby.We saw each other off and on for about a Year and a Half. The last time I was with him he had lost a lot of weight, when I asked if he had been sick,he said over half the cast had "AMPHETAMINE POISON".At that time the Show"HAIR"was going real Good.To do a Matinee,and a Show at night,the cast was having a hard time being as stalwart and full of energy as the show required.So,the cast Dr.gave them prescriptions to keep them going.Jerry was feeling real Bad for the rest of the cast,but there wasn't anything he could but feel bad.When I left New York,I really missed Jerry,he was a lot of Fun to be with.I am 63yrs.old now,I was in my early 20s then.I would like to just say hi to him,and thank him for all the Fun we had together.

Jerry Ragni would talk theater with anyone -- he ha d more ideas in any 60 minutes than most theater artists (I always thought he was a playwright who wanted to be an actor)-- he used to hang at Sandolino on Barrow Street until dawn -- I was driving a cab out of Dover Garage (which became the model for TV's "Taxi") when I go there usually about 11pm - Jerry was usually in there lecturing one of the patrons -- usually by 3am Jerry had gone through dozens of paper napkins with outlines and diagrams of a hyper-active mind -- ADD or ADHD maybe, since we were both seemed to be cut from the same piece of cloth -- I'm 63 now and he alwayys reminds me of the days when there were real creative people living and working in NYC -- there's creative people there now but if you were there, you know exactly how it's different