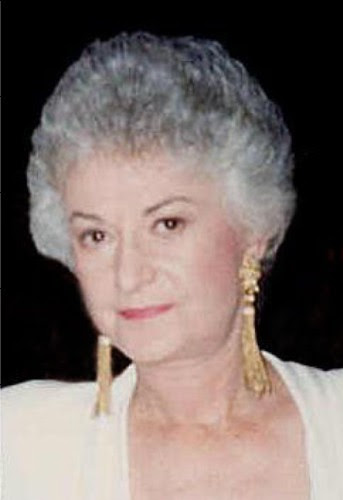 Friends of mine have heard my Bea Arthur impression. It’s me saying “Good Morning, Everybody” in an exhausted tone, my lowest register. That’s what she would say first thing as she arrived on the set of The Golden Girls during my short stay of one episode.

I played her daughter (Kate Zbornak) who was about to be married off. She never said another thing the rest of any day unless it was to give a directorial note. I got one as she opened the set’s front door to greet me/my character and moved in for a hug; “Don’t put your arms around my neck.” I made sure not to get another.

People always ask the same question about any celebrity I work with; “Is she/he nice?” I’ve asked it myself. In this case I would have to say no. We have no real right to want the people we admire to be approachable but it certainly makes working with them a lot easier. I’ve known perfectly despicable people who could be worked with. In those cases, people aren’t usually doing their best work-especially if it’s supposed to be comedy. I always hated those “trust exercises” in acting class but the point didn’t go unappreciated.

In Bea Arthur’s defense, I was just one more actress in a long line of guest cast members who drifted through the many pioneering shows she starred in. Situation comedy never being my strong suit, I probably wasn’t even a very good guest-cast member. But it wasn't just me. As far as I could tell, everyone got short shrift and a few got shorter. At the very least she had a lack of patience or compassion for anyone on the set. I spent time wondering what it would take to find her good side. I spent time making sure I didn’t cover it up with a downstage hugging arm. I made sure my deodorant was working, my breath was sweet.

Maybe she was going through menopause. Maybe her dog (if she had one) had died that week. Maybe it was a one-off. Maybe she was cheerful and gay the rest of the time. She may have felt my reticence toward her. In a later episode, Dorothy’s daughter was played by another actress. That actress and I have never compared notes. Maybe I was just unavailable for that episode.

I haven’t spent a lot of time thinking of her or my Golden Girls experience. Her coldness made it hard to be my best. It created dis-ease, was the beginning of my inability to feel good about myself in the business of acting. I admired her brilliant and hilarious work in spite of her manners, my experience. I’ve just always been a sensitive plant. 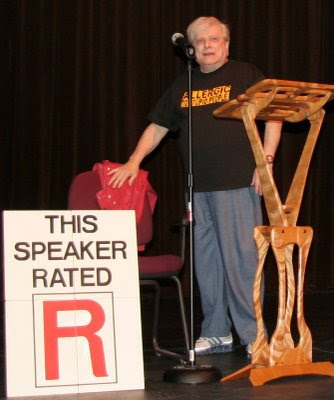 Look, just because we age doesn't mean we're dead. The business I've been in for more than half my life will try to break you then kill you. Let me count the ways--but not right now. Right now, I'm posting this press release from Harlan Ellison regarding his recent law suit.
Read this as a favor to yourself--and not just because it's great writing:

Harlan Ellison, multiple award-winning writer of the famed teleplay for the original Star Trek episode, City on the Edge of Forever, sued on March 13, 2009 for failing to account to, or pay, Mr. Ellison for the merchandising, publishing, or any other exploitations, of the famous teleplay, from inception to date. The suit also names the Writers Guild of America and alleges the WGA failed to act on Ellison’s behalf after numerous requests.

Ellison’s City on the Edge of Forever (the memorable episode starring Joan Collins as salvation sister Edith Keeler, the woman Kirk loved and watched die; remember?) continues, 35 years after its original NBC airing, to receive critical accolades, and has become legendary as one of the all-time money-making commercial favorites: it won the coveted Writers Guild award for year’s best teleplay; it won the “Hugo” award of the World Science Fiction Convention; it was ranked as one of the “100 Greatest Television Episodes of All Time” by TV Guide in 1997 as part of its 50 year survey; it was “One of the 100 Most Memorable Moments in Television History” in the 29 June 1996 nationwide survey; and as recently as its 20-26 April 2002 issue, TV Guide celebrated Star Trek’s 35th anniversary featuring, of the hundreds of episodes since its debut, its 35 Greatest Moments!

Harlan Ellison’s City on the Edge of Forever was #2.

Mr. Ellison’s attorney, John H. Carmichael, points out that the 1960 collective bargaining agreement between the WGA and the Producers, as amended in 1966, assures to the writers of individual teleplays “a piece of the pie.” Specifically, Mr. Carmichael states, “Writers under that WGA agreement are supposed to get 25% of the revenue from the licensing of publication rights. From Dollar One. Here, Paramount licensed its sister-corporation Simon & Schuster, through its Pocket Books division, the right to publish a knock-off trilogy of paperbacks – the ‘Crucible’ series – novels based on City, using Ellison’s unique elements: plot, specific non-Trek characters, prominently including The Guardian of Forever, singular conceptual uses of time travel, the sense of tragedy that propels the story, the mood and venue of the story in the 1930s Great Depression, and at the stories’ heart, pivotally, whether Edith Keeler lives or dies. Not merely minor points or window dressing or name-changes. No, they are the body, heart, and guts of Mr. Ellison’s original creation – the best story Star Trek ever told.

“But even as flagrant in evidence as is this case, has gone tabula rasa. will not respond to any alleged Guild requests for an accounting. Not just for the books, but for much City-related merchandise, such as a Hallmark Christmas ornament of the “talking” Guardian of Forever actually using lines Ellison wrote for his script – obvious re-uses of Ellison’s singular creation, for which he should be compensated. will not send statements; will not admit anyone is owed anything; and even when the WGA requests an accounting, they are blown off with – ‘we’ll get back to you,’ which they don’t. And the WGA seems routinely to accept such cavalier non-responsiveness without a fight. will not permit examination, and will not open the books; perhaps for fear of loosing a Super-Accountant/Pandora on them, who will open holes in their duplicity. But the WGA is clearly unwilling to take action on Mr. Ellison’s behalf, and so we must seek intervention of the Federal Courts to ensure that the principles of the collective bargaining agreement are upheld. Mr. Ellison is singularly reluctant to sue his own labor union, of which he has been a 47-year member, a valued public spokesman, and where he has twice served on its Board of Directors. In this fractious matter, Mr. Ellison is only asking for one U.S. Dollar from his Guild. But he wants a judicial determination as to whether the WGA is doing what its stated purpose has been since day-one! To fight and negotiate for him and other writers. To obtain misappropriated, withheld, hidden earnings, no matter how minuscule or difficult to retrieve – but HIS, nonetheless. These are intended, true, benefits from earlier WGA bargaining agreements. But after waiting patiently either for the Guild to move against dismissive Paramount, or for Paramount to have a brain-flare of honesty or integrity, these huge sums due continue to be dumped into the studio’s ever-hungry maw. Mr. Ellison wants every penny of his long ago agreed-upon share of the revenue from Paramount’s relentless Trek exploitations, which have been unbelievably, financially remunerative in demonstrable measure as a result of Mr. Ellison’s significant contribution to the original Star Trek series.” Carmichael highlights: LA Times, 28 July 2007: “ DVD sampler collects favorite episodes from all five Star Trek TV series.” The one starring Captain Kirk, Wm. Shatner’s pick as his favorite, is Ellison’s City on the Edge of Forever. (And see Ellison’s “Pay the Writer”–299,000 hits during the recent strike.)

“And please make sure to remember, at the moment some Studio mouthpiece calls me a mooch, and says I’m only pursuing this legal retribution to get into their ‘deep pockets,’ tell’m Ellison snarled back, ‘F- - - -in’-A damn skippy!’ I’m no hypocrite. It ain’t about the ‘principle,’ friend, its about the MONEY! Pay Me! Am I doing this for other writers, for Mom (still dead), and apple pie? Hell no! I’m doing it for the 35-year-long disrespect and the money!

“The arrogance, the pompous dismissive imperial manner of those who ‘have more important things to worry about,’ who’ll have their assistant get back to you, who don’t actually read or create, who merely ‘take’ meetings, and shuffle papers – much of which is paper money denied to those who actually did the manual labor of creating those dreams – they refuse even to notice...until you jam a Federal lawsuit in their eye. To hell with all that obfuscation and phony flag-waving: they got my money. Pay me and pay off all the other writers from whom you’ve made hundreds of thousands of millions of dollars...from OUR labors...just so you can float your fat asses in warm Bahamian waters.

“The Trek fans who know my City screenplay understand just exactly why I’m bare-fangs-of-Adamantium about this.”

When Mr. Ellison calmed down, he continued, soberly, “They maintain fortresses staffed and insulated with corporate and legal Black Legions whose ability to speak fluent bullshit is the ramadoola of gyrating, gibbering numbers via which they cling to every dollar. And when you aren’t getting paid for the marvels you helped bring forth -- fine, hard, careful artifacts that are making others pig-rich -- at some point any sane person knows he has three, and only three choices: the first is to sit around dinner parties and ceaselessly whine over your sushi about how they screwed you, boo hoo, but you can’t beef about it Out There in the World or they’ll blacklist you; the second is to pick up an Uzi somewhere, crash your SUV through a Studio gate, and just run amok; and the third, last, choice is this one – to act like an adult, to take ‘em on in Federal Court and to make the greedy, amoral bastards blink blood out of their eyes. What they do is tantamount to common street-thug robbery... just add the pig-rich Madoff-style smoothyguts attorneys.

“And I learned today that the Actors Guild is having to fight, right now, just to maintain the very concept of residuals as part of their agreement with the Producers. So I am happy as a centipede-with-track-shoes that this infamous behavior, arrogantly ignored for too damned long, is timed to call attention to the degree to which the creative cadres in this business are getting parboiled and served up in a dog-dish! The part of this imbroglio that truly dismays me, is that my once-tough, beloved Guild – my UNION – that got massively screwed when it let the Alliance scare the slacker-gen dolts into thinking not losing a job meant ‘just bend over and grin,’ – if one’s own damn Guild won’t help you, – when you’ve entreated them for months – then hell, you’ve got no choice but to raise the skull and crossbones, hone the edge of your demon attorney, and just start cutting off noggins and nuts.

“Cowardice is like parrot fever in this town; I think there are writers and other artists who revel in being bitch-slapped, in being pilfered on a regular basis, as if they were artistic trailer-trash! And if the WGAw isn’t going to watch my back – and I’ve been their loyal hit-man, pit bull, and go-to guy for 47 years – I dread the possibility that the timorous Guild won’t raise the bloody axe for other artists, writers, actors...saner and less pissed-off than I. So you can tell’em I’m coming!”

There were flecks of blood on Mr. Ellison’s otherwise charming face.

DISTRICT COURT FOR THE CENTRAL DISTRICT OF

JUDGE: The Honorable Christina A. Snyder

Posted by Lisa Jane Persky at 12:06 PM No comments: