While I'm unveiling interviews by so-called children with so-called grownups here's a good one with funny bits:

The story says Jerry Levitan snuck into John Lennon's hotel room (Toronto '69) with his tape deck and interviewed John about peace. This is a film Levitan produced using the recording as soundtrack. Director Josh Raskin has created an animated visual narrative from the pen and ink art of James (Braithwaite) and digital illustration by Alex Kurina. This is a great collaboration and includes a timeless lesson from John. Peace. Now.
Posted by Lisa Jane Persky at 11:33 AM No comments:

The Topic of Suicide

Three things not for everyone:

2. Book about Suicide:Gary Valentine Lachman, ex of BLONDIE has written a highly readable and occasionally even amusing book on the subject of literary suicides: The Dedalus Book of Literary Suicides can be ordered from Amazon .Buy the book.

I "discovered" Suicide for myself at Max's sometime in 1975. I'd seen a lot by then but wasn't prepared for an act so stunningly unique and original and they've never strayed from the original seed of their expression. They've only polished, protected and perfected it. 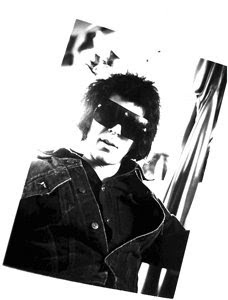 Submitted for your perusal, unedited and uncompromised is my interview with Alan Suicide from NEW YORK ROCKER Issue #. I hadn't read it in years and it was one of my first experiences as interviewer. Obvious to me now (other than my own lack ) was that I wrote this for readers who were already acquainted with the band. But…that's how we began at NYR; writing for the initiated. It contains some eternal SUICIDE truths. Own the CD’s. See the band.

They were, and I imagine still are truly electrifying in person.


Suicide Note: “The thought of suicide is a great consolation; with the help of it, one has got through many a bad night.
----F. Nietzche

A Beginners Guide to Suicide:

In this chapter, Suicide is redefined and is depicted as a great metropolitan superhero disguised as a man. Victimizing the public with new versions of an old idea, he fights the crime of boredom by making the best of what is his to use. HIS ONLY WEAPON: A.C. CURRENT.

Already imprisoned by Suicide are the long sought after diodes, electrodes, cathodes and anodes that without his guidance run rampant, wreaking havoc among our already too sensitive eyes and ears. In the controlled environs of Alan Suicide’s Fortress, great creations are born. It is these very creations which turn the aforementioned potential foes into allies.

Suicide alone is responsible for the containment of light and energy in sculptural form which is often on view at the in . But it is the magical association with his sidekick and musical entrepreneur that brings our hero to Rock n Roll. A sole lavender neon tube rendering the enemy pleasant within lights the electronic and riotous keyboards belonging to Marty, whining to his whim. Suicide soon surrenders himself to the sounds, succumbs to the stare and surprises ensue. Sexual Sado-Machismo Rock.

Suicide has a devastating effect on everyone left in his wake. The real victims are those left to decide what will be done with the body.

LJP: Do you really hurt yourself on stage?

AS: Oh yeah, that’s cool though. Everything heals incredibly rapidly for some strange reason. I get really heavy welts on my leg, bruises and the whole trip. It does a three day number. It goes from red to blue to better. See the cuts on the face? (He indicated the lack of scarring made from a previous slice made with a safety pin.)

LJP: How do you think you affect people who come to see you?

AS: It’s like when you’re walking around feeling really unsure of yourself, you don’t believe in yourself and then you see somebody else doing the same thing you’ve been thinking about so suddenly you don’t feel so alone any longer. You start thinking maybe I’m not as crazy as I think I am. There’s another nut like you. And then you see three nuts and four nuts and five nuts doing the same thing and suddenly you’re just dull. First you thought you were crazy and then you thought Oh well I’m just a genius and then you just realize how dull you are. I think it makes people feel better to know that somebody else is not only in that same place but is showing it right up there on stage. I think it cools them out. It’s like when you get turned on to a painting or a book or a piece of musing and you’re wandering around hearing those sounds and seeing those pictures in your head and you think; Hey I better go check into the nearest loony asylum.

LJP: Did you ever do that?

AS: No. No, you ain’t getting’ me into one of those things. Never. What a bore. What a fucking bore and a waste of time. You might as well walk around in the street being crazy instead of being shut up in one of those places. That’s why I’m never going to do anything too serious. I just don’t want to have to deal with cops and all that shit. It would really be a bummer to try and kill yourself and not pull it off because you’d wake up and you’d see the overhead light and the green.

LJP: Has anyone ever tried to hurt you during a performance?

AS: Oh yeah. Sure. Everything was thrown at me; punches, chairs, bottles, cigarettes, instruments, you name it.

LJP: Did you ever get hurt?

AS: No. I just dodge it as it comes. Oh yeah, I got slow one day. I got smacked in the head.

The other night a girl came and took her shirt off for the duration of the act.

LJP: What other kinds of things happen?

AS: She once tried to split her head open. She got drunk and she was dancing and she got crazier and crazier as the gig progressed. Then she just started smashing her head against the wall and I tried to stop her. I finally thought I had her. She was on the ground. I was singing to her on the floor and she just looked……she was bleeding all over the place she’d split her head. Then she got up and she went at it again. Jumped right up and ran right into the wall. I was full of blood.

LJP: Are you always so aggressive toward your audience when you perform?

AS: Who’s aggressive? I thought I was being really cute. The ones who find me really aggressive are tho ones who finally come around to really loving it or feeling it. In the old days when we would perform, we used to be able to clear out a hundred people but now it’s the opposite. People are coming. It’s going the other way, which has just happened over the past year. Before, It was a bummer to be an artist and be in rock and roll at the same time, but it’s getting there. The scenes are pushing to hard at each other it’s ironical, I think. There’s finally an intermingling. The Heartbreakers, for instance, even though they’re not going out and looking for another scene, they are picking it up because they’re closer to it being around CBGB’S, being in that neighborhood, being around various new kinds of people. If they were aware of other things, The Heartbreakers for instance coming out and doing a fifties trip with some kind of electronics, can you imagine? That group would be the most incredible thing in the world. But they just stay into whatever their format is so they’ll just be greasers. I can only take the bands now, the way they are, for the first few minutes, then to really get off, I start fantasizing about what they could be. The truth of the matter is that everyone, including myself, is such a moron.

New Yorkers are great though…they’re the toughest and the warmest. is the grandest shit scene of all time. It’s like the Titanic a thousand times over; just sinking away but it’s beautiful. I could say I’m political because I do what I do. The problem with artists is that they just don’t reach a large enough audience. They can’t get their work out enough to make a really heavy change in society and if they do, it takes such a long time. I’m definitely not fucking around with what isn’t going to sell. That’s the whole trip. Being an artist is one thing but being able to take your work and sell it, that’s the real art.

Posted by Lisa Jane Persky at 2:10 PM No comments: