Okay, so there's this movie with the unwieldy title "KISS Meets The Phantom of the Park". I was in it. In 1979. When I went for my fitting, I met Gene Simmons. It was immediately clear that he was not going to be any fun and that he was also not going to have any. I had no idea why but decided not to take it personally. I had my own gang in the picture; a couple of guys named Chopper and Slime. I had lip. I didn't need tongue. 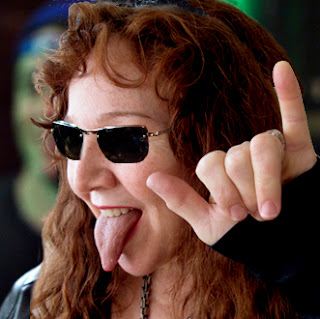 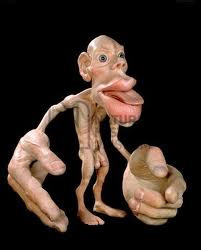 I was less excited by KISS and more excited about being directed by Gordon Hessler, who had worked with Vincent Price three times and directed "The Golden Voyage of Sinbad." Gary Valentine (Lachman), my boyfriend at the time, had recently exited the band Blondie; he and I had seen "The Golden Voyage of Sinbad" more than once and thought it was the baddest of Sinbaddian adventures. It features a homunculous (left), and who doesn't like a story that includes one of those? It also features special effects by the one and only Ray Harryhausen. I was looking forward to working with Gordon, who was a pro and a gentleman. I also appreciated the irony of being a proto-punk working on behalf of a campy hard rock band. The rest, as they say, is KISStory. The production proved to be a trying time for all. On any bad movie gig, you know that eventually the pain will end.  When it was over, I was sure I'd never hear of it, think of it or see it again.

Okay.
I was wrong.

In 2001 or 2 I heard from a nice guy named Ron Albanese. He wanted to interview me for a book he was writing about KISS with the even unwieldier title: Easy Catman, They Are Serious: The Complete Guide to Kiss Meets the Phantom.  He offered to take me to Magic Mountain to terrorize the park a second time (I have NEVER been back) just to jog my memory.  I was, like, "You wanna WHAT? You're gonna make me have to  remember THAT?!"
I gave the interview, declining the nostalgic trip to the Mountain. I'm not certain whether he wrote the book, but after we talked I forgot about KISS and KMTP some more.

It was October of 2007 before I was reminded again and finally convinced that the movie had some cult traction based on how hilariously, or, depending on who you ask, how painfully bad it is. I have to thank the following people for my change of heart and mind (from shame to a lemony fresh pride) regarding my participation in the KISS legacy:

Ron Albanese for being the first to try to explain.

Jesse Capps of Rock Confidential with whom I did this in October of 2007: ExclusiveInterview: Lisa Jane Persky from KISS Meets The Phantom of the Park.

Gary Schaller and Ken Mills of podKISSt, who called In August of 2009, prompting a very fun hour-long chat about the movie: PodKISSt #23 KISS Goes To The Movies

Tom Scharpling, Jon Wurster, Paul F. Tompkins and the FOT for drawing me out of the shame-y darkness. Tom's is THE Best Show on WFMU.

Rick Vondehl, a great artist and designer who worked with me on the Dirty Dee T-shirt , Gary Strobl silk-screen genius and the two good-looking guys who model said shirt, Steve Moulton and Skyler Caleb of Acting Up.

and Yay Interwebs!--for getting us all together.

All this backstory is just to let you know: I'm comin' to Jersey, baby!
Hope to see you there. 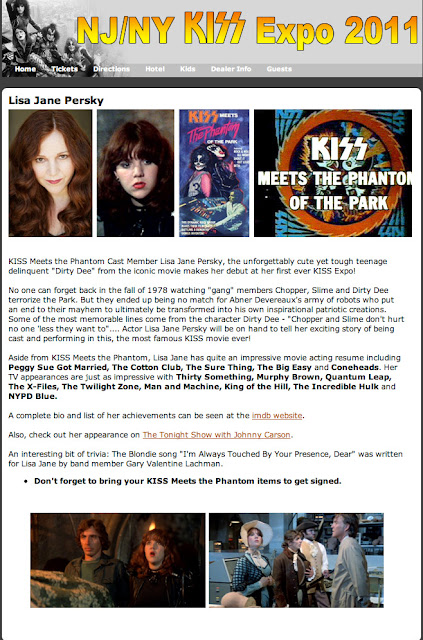